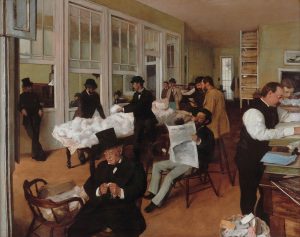 Edgar Degas is known for his dancers. His stark imagery of young ballerinas in motion and at rest made him famous. Because he was a native Frenchman, one might think that he would have no connection to the American city of New Orleans, but that conception is false. In fact, Degas actually had family in New Orleans, which is what led to an extended visit on his part to a city, and a country,

that had recently been torn apart by the American Civil War. In visiting New Orleans at this time, Degas was escaping a separate conflict in his home country: the reign of the Paris Commune. Instead, he experienced the contentious Reconstruction era in a New Orleans that was politically unstable. This was also an important time for Degas and many other artists, as they used the war-torn landscape of Louisiana and New Orleans to fuel their creativity. Degas’ presence was particularly interesting though, because he was the only French painter from the impressionist movement to paint New Orleans, and his stay in the city took place early enough in his career that it was a formative experience for him that established major elements of his style. In this way, it was an inspiration for his later work, and established his place as one of the creative minds (such as Kate Chopin) who was captivated by New Orleans.