One thing that resonates with me about Kate Chopin through her novel The Awakening is that no matter how long the story is, she is able to show so much through her words. When reading The Awakening, readers are able to picture the setting so vividly that it feels as if they are actually there experiencing everything with Edna Pontellier.

“Mr. Pontellier, unable to read his newspaper with any degree of comfort, arose with an expression and an exclamation of disgust. He walked down the gallery and across the narrow “bridges” which connected the Lebrun cottages on with the other. He had been seated before the main house. The parrot and the mocking-bird were the property of Madame Lebrun, and they had the right to make all the noise they wished. Mr. Pontellier had the privilege of quitting thier society when they ceased to be entertaining.” (1)

While this quote is in favor of Mr. Pontellier, I think it shows a great representation of how descriptive Chopin makes her work. I am able to sit and imagine as if I am there with Mr. Pontellier. I can almost hear the parrot and mocking-bird making all the chirping (and speaking) that they wished. Chopin then goes on to describe Mr. Pontellier in such great detail, saying that, “He was a man of forty, of medium height and rather slender build; he stooped a little. His hair was brown and straight, parted on one side. His beard was neatly and closely trimmed.” (1) 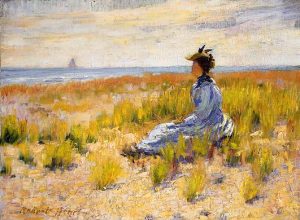 Many novels and stories that are published now seem to want to get straight to the point too soon without showing the reader the environment around the characters. I have experienced this a lot in novels that I have been reading where they just choose a major city, like New York City because it is so easy to conjure up an image of what that city looks like. I know when I read novels, I want to know what the story would be like if I was a character within it, and I feel like Chopin is able to take the simplest setting and allow the reader to see it, not only as if they were there, but if they were Edna.

Although this story is not written in first-person, Chopin is able to write in third-person as if she is. I personally think she is able to do this through the detailed and evocative imagery that she explicitly uses in this novel, creating the vivid, yet depressing feeling that needs to be there in order for readers to understand the story.

The ending of the story also invites such vivid picture for the readers. The words that Chopin uses makes the story go from a depressing feel to almost feeling free.

“She thought of Léonce and the children. They were a part of her life. But they need not have thought they could possess her, body and soul…She looked into the distance, and the old terror flamed up for an instant, then sank again. Edna heard her father’s voice and her sister Margaret’s. She heard the barking of an old dog that was chained to the sycamore tree. The spurs of the cavarly officer changed as he walked across the porch. There was the hum of bees, and the musky odor of the pinks filled the air.” (116)

The readers are able to experience the life that she missed and wanted to go back to. They are able to imagine the voices of her father’s and sister’s while hearing the bark of the neighbor’s dog. They could feel Edna finally being in a place where she can be happy and she doesn’t have to hide how she feels.