Symbolism is no new concept in literature, and yet it is still an effective method of communicating significant points in a written work. In The Awakening, Kate Chopin uses the sea as one such symbol. As I will discuss below, the strategic mention of the sea and its characteristics parallels the emotions of Edna Pontelier as her story progresses. 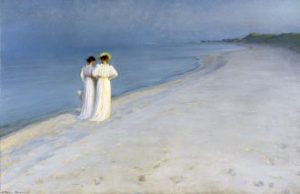 At the beginning of the story, there are several indications that the characters are near water, but the first direct mention of the sea appears in chapter three. In context, Edna is crying after her husband accuses her of not caring for their children as a mother should. Edna stops in this moment of time before the tears fall, and the “everlasting voice of the sea“ reaches her ears (Chopin, Chapter 3). The author goes on to describe the water as “it broke like a mournful lullaby upon the night (Chopin, Chapter 3).” The parallel between the sea and Edna’s emotions is found when she expresses sorrow as the waves sing their sad song.

Later on in her story, we learn that Edna has been trying to learn how to swim. Up until this point, she has been unsuccessful, but as it finally comes to her, she becomes drunk in her sense of power, effectively trying to conquer the sea and find freedom in it, as we see in the following passage:

She turned her face seaward to gather in an impression of space and solitude, which the vast expanse of water, meeting and melting with the moonlit sky, conveyed to her excited fantasy. As she swam she seemed to be reaching out for the unlimited in which to lose herself. (Chopin, Chapter 10)

The above-mentioned pursuit of freedom in the sea is ultimately what ends Edna’s life at the end of the book.  Perhaps it is her despair at Robert’s departure, or a longing to recapture the feelings of that summer, that lead her back to Grand Isle. It is there that she goes for a swim in the water and drowns in the sea whose spirit called her name.