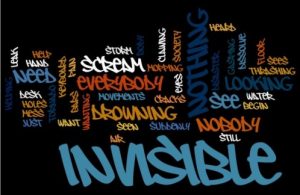 The characters that we have discussed in the class so far have felt invisible within their own worlds. Binx feels invisible when he is surrounded by others, and Ophelia felt invisible in the house until she was auctioned off. Edna was visible to Robert and Mml. Ratignolle, but she was little more than an ornament on her husband’s arm. These connections of invisibility seem surprising because there is evidence of their visibility in each story, yet these characters go through a crisis of identity due to their perceptions. The connection between Binx and Stella is similar, yet their respective outcomes are different. They both fought against their families’ expectations for their futures. Their outcomes are vastly different, and in a way they play into their sense of invisibility. Binx fights and still ends up following his family’s expectations. Stella fights, wins, and ends up in a situation that she is seemingly happy in. It’s not until her sister is taken away that she realizes the damage of her situation, and it’s almost as if she would like to be invisible in the last moments of the play. In a city so large, it is understandable how people can become invisible, but the worlds that these authors have created are so small that their characters’ invisibility is monumental.