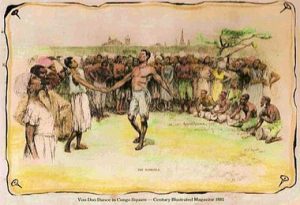 Congo Square, located in New Orleans within Louis Armstrong Park in Tremé, is a cultural landmark known for its deeply rooted significance to African- American and New Orleans culture. The square first came to be widely known during the 1800s when both free and enslaved Africans were permitted to worship and sing songs native to their homeland under the Spanish and French colonial rule. Congo Square was designated as one of the only places blacks were allowed to gather freely every Sunday afternoon without fear of being reprimanded. This rare allowance attracted hundreds of people, varying in class, from different parts of the city, and the gatherings were said to have been so large that thousands of people were amassed at times. 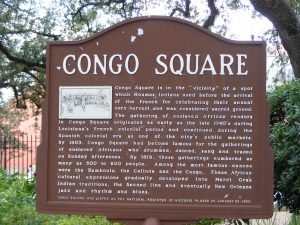 This tradition, originally populated almost entirely by Africans, soon became an attraction for white New Orleans citizens who saw these happenings as a glimpse of Africa and exoticised the intricate drum patterns, dances, religious practices and vocal stylings. Voodoo practitioners such as Marie Laveau often performed altered versions of ceremonies that celebrated African culture although the more closed ceremonies were held privately elsewhere. Congo Square also began to act as a marketplace, allowing the enslaved to experience the economic freedom they hadn’t previously been able to employ. The market gave enslaved Africans the hope of one day being able to buy their freedom in order to the escape the harsh conditions they lived in.

Congo Square is thought by some music historians to be the birthplace of many musical artforms, most notably, jazz. The unique blend of African customs from countries such as Senegal and Mozambique blended with American and European culture to create the unique artforms and styles people of African descent pioneered. Quotes from onlookers during the time describe “tribal groupings” throughout the square which each had attire and songs unique to their own cultural roots. This unique cultural exchange led to amazing creative outcomes. 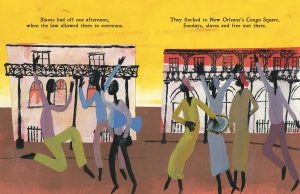 (From the book Freedom in Congo Square by Carole Boston Weatherford)

Throughout its history, Congo Square has been known by many names including Place Publique, Place des Nègres, and Place Congo as well as others. The tradition of using the space to honor African culture continues to this day as efforts are made to preserve this unique facet of African-American history. Festivals, community meetings, and social justice events still occur in the square. Groups of people such as the Congo Square Preservation Society, spearheaded by activist Luther Gray, gather to sing traditional songs and educate those who may not know the long history and significance of a seemingly ordinary place.