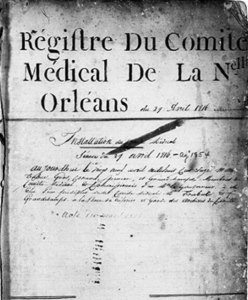 de and population in New Orleans began to increase, the need for healthcare in the city increased as well. The diversity of the population beginning to settle in the city made it so that practitioners of various backgrounds who spoke different languages were necessary to aid the community. In turn, medical societies were formed. The societies were fairly unsuccessful, as practitioners struggled to communicate due to language barriers. Cultural differences led to varying medical opinions on courses of treatment, adding to the difficulty of creating a medical society of practitioners who shared similar ideologies. One of the more successful societies was called The West Feliciana Medical Society. These societies did things similar to that of the current-day American Medical Association, such as establish general standards for ethics, ettiequte, and health. A larger state-wide society was created later in 1878  that led to further advances in medicine, ethics, and ettiequte in the state of Louisiana, replacing the smaller societies mentioned above. This society, the Louisiana State Medical Society, is still in action today.