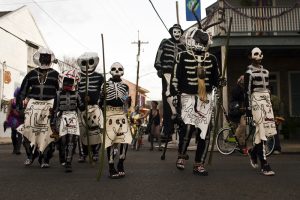 At 5:30 in the morning, while most of us are still sound asleep, the Northside Skull and Bones Gang members are emerging from cemeteries and waking up Tremé for Mardi Gras.

This is their way of scaring the community straight. They focus on the younger men and warn against domestic and gun violence. They also want to keep the youth away from the dangers of the streets. 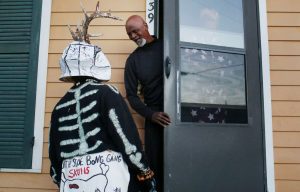 As the group walks through the streets, banging on doors and chanting “You better get your…life together, next time you see us…it’s too late to try!” they greet people and talk to the children that they come across.

This tradition began in 1819 and is now continued under the leadership of Bruce “Sunpie” Barnes. The tradition was dying out before Barnes became their chief. He now plans to continue the tradition by bringing in the “next generation of young African-American men to dress out with him.”

Another aspect of this gang that differs from the typical image of Mardi Gras is their outfits. Most outfits that people think of are made of silks and satin. The Northside Skull and Bones Gang uses simple fabrics for their outfits because the origins are from working class people.

This group not only gives the people of Tremé a literal view of the “shedding of flesh,” they also give a chilling warning to them about the dangers of the streets.

For images of the Northside Skull and Bones Gang visit here