As New Orleans’ Tricentennial year approaches, the people of New Orleans celebrate three hundred years of culture, music, art, history, and change. The city’s myriad architectural styles reflect that change within the city’s twenty districts, or wards. Below, I present five typical building types that have been expanded upon with many individual and distinctive architectural attributes that contribute to the lively aura of New Orleans. 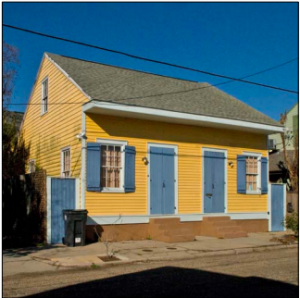 Creole Cottages were some of the first buildings to arise in New Orleans starting in the 1700’s. (Creole, by the way, was a term used by the French to identify those who were born in Louisiana rather than in France or elsewhere.) This home had both Spanish and French influences that were then altered to the environment and climate. Creole Cottages tend to be symmetrical, with subtle stylistic features.

The Townhouse appeared after the Creole Cottage, appearing in the late 1700’s and early 1800’s. The Townhouse  had more Creole influence. The efficient utilization of land led the Townhouse to become increasingly popular in urban areas. The individual structure pictured below is a Double Gallery Townhouse. It has more rooms than the typical Townhouse, and follows more of a Creole style than an American Style Townhouse (pictured above). 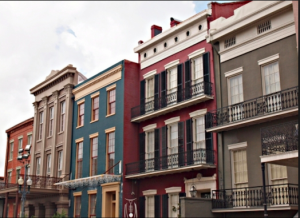 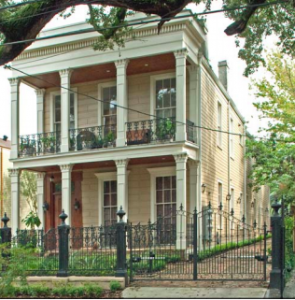 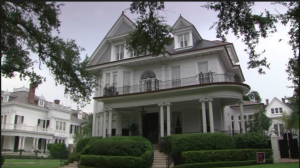 Center Hall Cottages (Raised), or Villas, are typically larger and are placed upon raised foundations. This style of building can be found throughout the South as well as the Caribbean. Typically accompanied by a front porch supported by columns, these houses can be found in a multitude of styles. The most common, are the Greek Revival and Italian Hall Center Cottages, with prominent pillars accenting the house and porches. Queen Anne/Eastlake styles can be found along with other Victorian influenced houses. 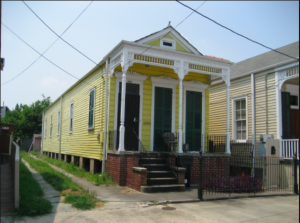 The Shotgun has been thought to have been introduced to New Orleans in the early 19th century. The Shotgun was named so, after the tale that you could shoot a shotgun and the bullet would go straight through the house, and out the other side. The Caribbean style it draws upon is perfect for the damp and marshy environment. It is raised upon stilts (as most homes in New Orleans are), and is a long, narrow structure that makes it inexpensive. As a result, the Shotgun is one of the most common buildings found in New Orleans.

The final classic house found in New Orleans is the Bungalow. A deeper set and lower house than the aforementioned buildings, the Bungalow did not begin to appear until after World War I. These buildings typically are as wide as they are tall, yet they have an asymmetrical appearance as their roofing structures fluctuate and incorporate more windows. 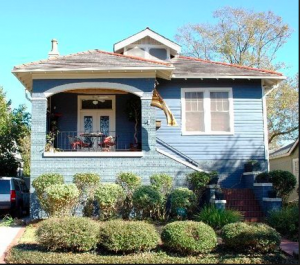 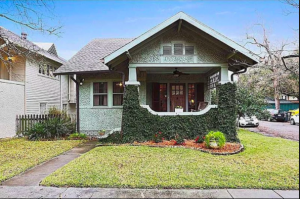 For more information on the foundations and number of rooms, check out Building Types & Architectural Styles and the New Orleans Architecture Tour.