March 19th, two days after St. Patrick’s Day, and one day after my brother’s birthday, is the celebration of St. Joseph’s Day. This day celebrates the Sicilian traditions that arose in New Orleans to celebrate the relief the saint – St. Joseph – brought to villages in Sicily during famine. As the Sicilians crossed the Atlantic from the 1800’s to the 1900’s to cut sugar cane along the Mississippi, they slowly brought their traditions to New Orleans. New Orlean’s once again embraced, and melded the new culture with the already eclectic atmosphere. 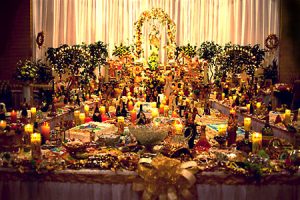 A large portion of St. Joseph’s day are the alters that are created, decorated, and embellished to provide a rich atmosphere and reminder of the wealth of life. Joseph’s altars have brought communities together, as people partake in the creative endeavors to create the lavish altars. The altars a symbol and promise of prosperity to feed everyone in the town so they will never go hungry again. The altars hold true to this vow, as food is served at the feasts on St. Joseph’s Day, and food and funds are distributed to those in need.

Traditional food laid out on the altars includes a wide variety of cakes, cookies, breads, as well as fava beans. Fig cookies and Zeppole (or Sfinge) are common desserts found on the altars. The Zeppole/Sfinge are the equivalent to doughnuts/doughnut holes that are filled with custards and jellies. Depending on where they are being made, they may have a more French influence as they are made from choux pastries, and resemble a cream puff. 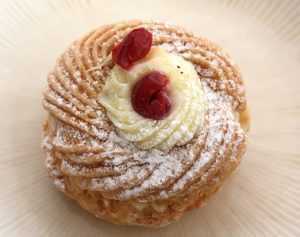 The fava beans that can be found strewn about the altars, and in the streets during the parades, correlate with the famine of Sicily. Fava beans were a form of cow feed, but with the drought, the people of Sicily learned to cook the fava bean. It was a gift from St. Joseph that saved Sicily, and is seen as a symbol for good luck and prosperity today.